Last week my wife and I enjoyed a wonderful, if often wet holiday in Scotland; two nights on the Isle of Arran, two nights on the Island of Gigha and two nights in Oban – and two new ‘tidal islands’. Being islands off islands they wouldn’t have qualified for my book No Boat Required and we found that one of them would now come under the ‘nearly tidal’ category.

The remote community owned island of Gigha is off the west coast of the Kintyre peninsula, between the mainland and Islay. It’s 7 miles long by about 1½ miles wide, has a population of 31 and with many white sand beaches is a truly wonderful island.

Off the north west corner is Eilean Garbh, which many photos show connected to the main island by a strip of white sand. One photo even accidentally found its way into a holiday brochure for a Caribbean island and no one noticed that it was actually in Scotland. With just two days on Gigha we had to ignore the weather, so having walked down paths from the island’s only road, we arrived soaked through. It was then that we found that this is no longer a tidal island. Marram grass has grown up across the centre of the sandy tombolo that linked Garbh to Gigha, leaving beautiful white sand beaches either side (they look whiter when dry). 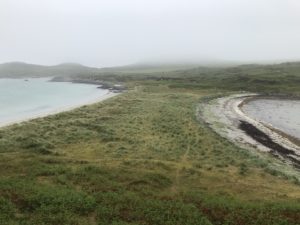 We walked across to Garbh but the ascent to its summit is steep and I didn’t need too much persuasion that to climb the slippery ladder fixed to the rocks was a risk best not taken. Returning to the Gigha Hotel for dry clothes and warm lunch we learned that the marram grass became established some years ago and the spot is now known as the Twin Beaches. Beautiful even in pouring rain, this must be an idyllic spot when the sun shines. We will return one day. 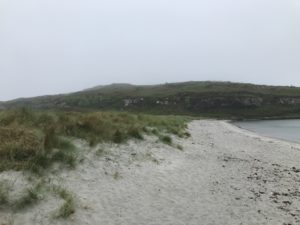 On mentioning No Boat Required to a lady in the craft centre we were told that Gigha does still have its own tidal island; Eilean a Chui in Ardminish Bay. We could see it from our hotel bedroom window. With long Scottish evenings we could visit after dinner, by which time the rain was lighter, but still wet enough to keep the midges away. There’s a short rocky causeway by a tiny harbour but it was easier to walk across the sand. The island, which is accessible most of the time (Gigha’s tidal range is remarkable small) is quite small (but bigger that it appears on the photo) and a true tidal island to add to my list. 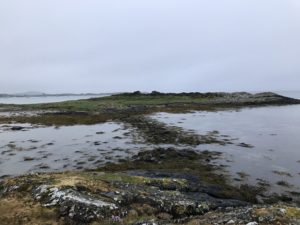 Should anyone get the opportunity to visit Gigha we can thoroughly recommend this little known but beautiful Scottish island.

I would have liked to post some photos of Gigha taken in better weather but the cloud didn’t lift for our entire stay, so just to show that the sun did shine in Scotland here’s one of Holy Island off Arran.