Today’s coronavirus lockdown permitted exercise took me past Pike Pond, a small pond in the countryside that surrounds Upminster. I walk past here every so often and it always brings back memories of childhood fishing trips. 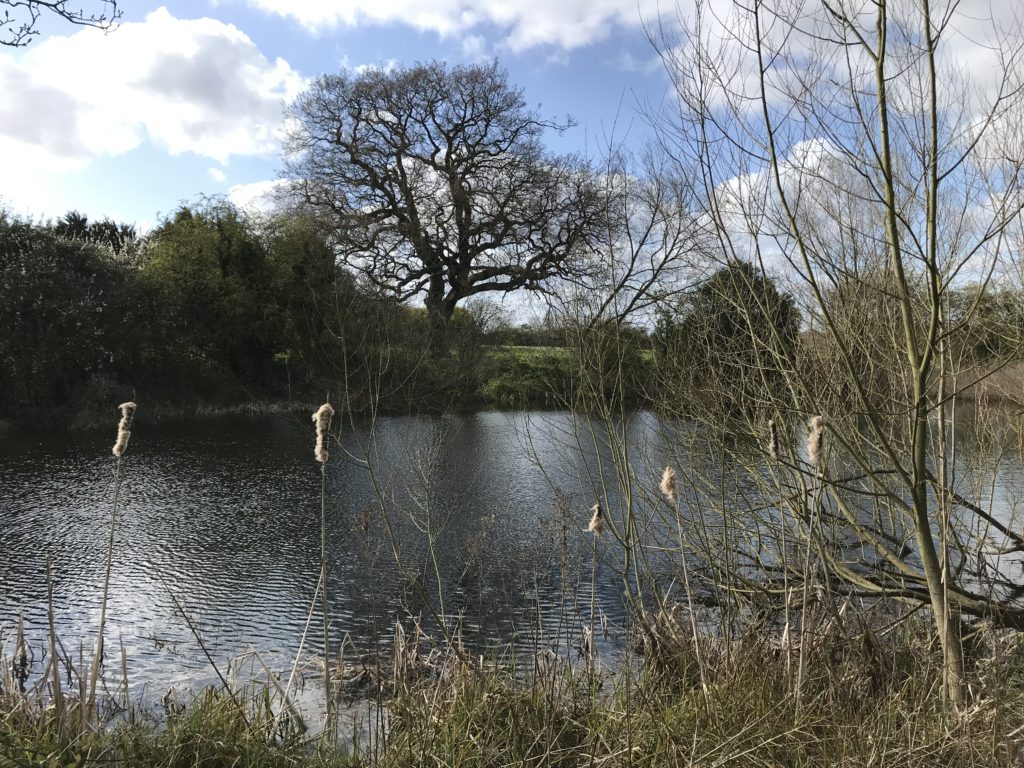 From the mid 1960s to early 1970s my father used to take us here, initially using a rod and reel that belonged to our Great Great Uncle Henry who died in 1917, so must have been in the region of 70 years old. The end section has been lost but Dad made a replacement with a bamboo cane.

For a long time we didn’t catch a thing, then found that worms were no longer the fishes’ choice of snack but that they loved a paste that another fisherman had introduced us to – a mixture of flour, custard powder, sugar and milk that was carefully blended to the right consistency before each trip. Soon we were catching fish, mostly crucian carp, plus a few perch and the occasional trench.

Catches improved when we found that maggots could be purchased from Wards Sports in Upminster, our attempts to cultivate them in the garden by leaving out rotting bread being entirely unsuccessful. A little misunderstanding in the shop meant that our first purchases was far too large. Dad asked for 20, thinking that would be about the number of maggots required, but we were given 20 pence worth in a big pot. Now knowing that the chap in the shop didn’t count out a set number of wriggling maggots, ten pence worth proved ample for future trips.

Before long I was given my own rod for Christmas. It was only about six foot long but had a fixed spool reel, so tangles permitting, I could cast into the centre of the pond. Dad also bought a new rod and we were adequately equipped for fishing in our local pool.

Often we went early in the morning, arriving hours before anyone else. My sister and I would get up ridiculously early and try and persuade Dad to get out of bed far sooner than he’d planned. On one occasion I awoke even earlier and on investigating noises from my room, Mum and Dad found me getting dressed before they’d even gone to bed the night before!

Sometimes we’d take a little spirit stove and cook breakfast, Mum bringing our younger brother to join my sister, Dad and I. It was often a Sunday and we’d hear the bells from nearby All Saint’s Church and watch  trains on the Upminster to Grays line passing every half hour.

Inevitably there where was a famous occasion when I fell in. Short wooden piers had been constructed around the pool and in my efforts to achieve a long cast I followed the line into the water. My boot had to be checked to see if it had caught a fish and my sister had to donate some of her clothes to keep me warm. I was cross that other people around the pond laughed at me and that we had to go home.

Sometimes my sister would catch a fish, or at least reel one in that Dad had hooked. ‘Poor little darling’ she said when she saw the first one. I maintained they weren’t actually her catches, an argument which was pressed strongly on the occasion when she caught more than me.

Pike Pond was a day ticket water but the bailiffs rarely came round to sell tickets and check that our yearly Essex River Board Licences were in order. Occasionally we ventured elsewhere, trying Parklands, a lake on an old Upminster estate and Stubbers, another estate with several ponds closer to South Ockendon. Once we took our rods on the train to Manningtree and walked to the River Stour near Flatford Mill, but we never caught anything away from Pike Pond.

Once at senior school I started fishing with a friend Glen. I took him to Pike Pond, which had now been stocked with a large number of tiny rudd and some reasonable sized roach. He took me to South Weald in Brentwood, then for some reason I stopped fishing for a while.

Deciding to take it up again, one evening after school I went on my own to Pike Pond. A plethora of notices now warned that it was private and before I could ignore them the farmer came along and made it clear I must leave. I fished at Parklands and South Weald for another year or so but it was Pike Pond that was my fishing home.