While the beaches at Clacton, Frinton and Walton were packed, last week I enjoyed a far quieter walk beside Hamford Water, the large inlet south of Harwich also known as The Walton Backwaters. It is a hugely important site for birds and was the setting for Arthur Ransome’s Secret Water.

Beaumont Quay is at the end of a man-made cut along which boats were engaged in flourishing trade. It was built in 1832 using stones taken from the old London Bridge. The wreck of The Rose, originally a 42 tonnes Thames sailing barge, has lain here since the 1960s. It has deteriorated significantly since I first saw in in 2007 when I came this way writing Essex Coast Walk. The first photo was this week and the second is from 2016, so it hasn’t changed much in four years. The lime kiln photo is also from my 2016 visit. The quay was taken last week when I returned in evening light. The fish who had been swimming by the wreck were long gone. 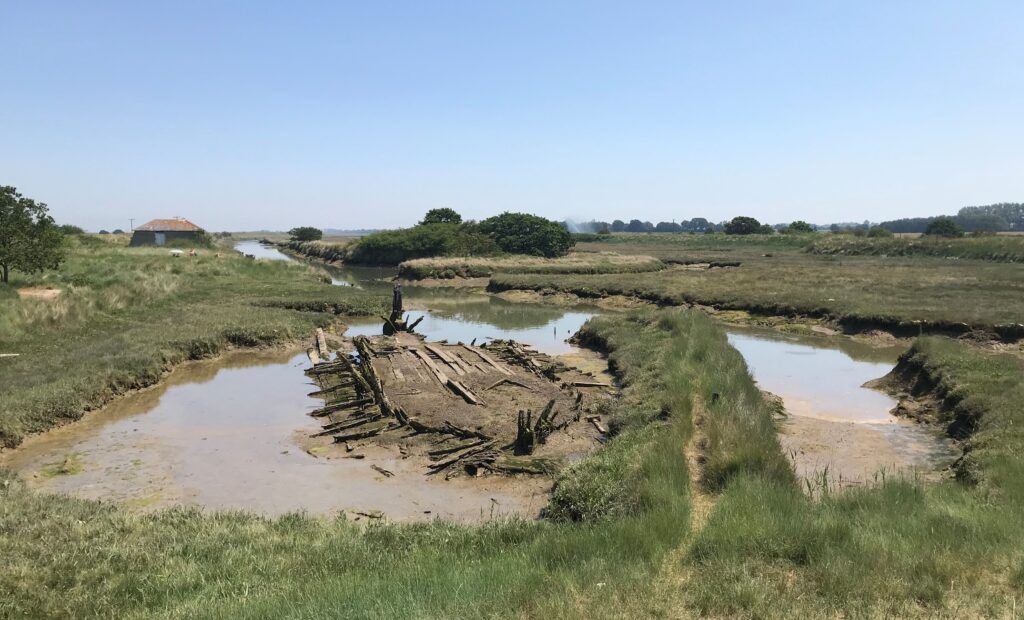 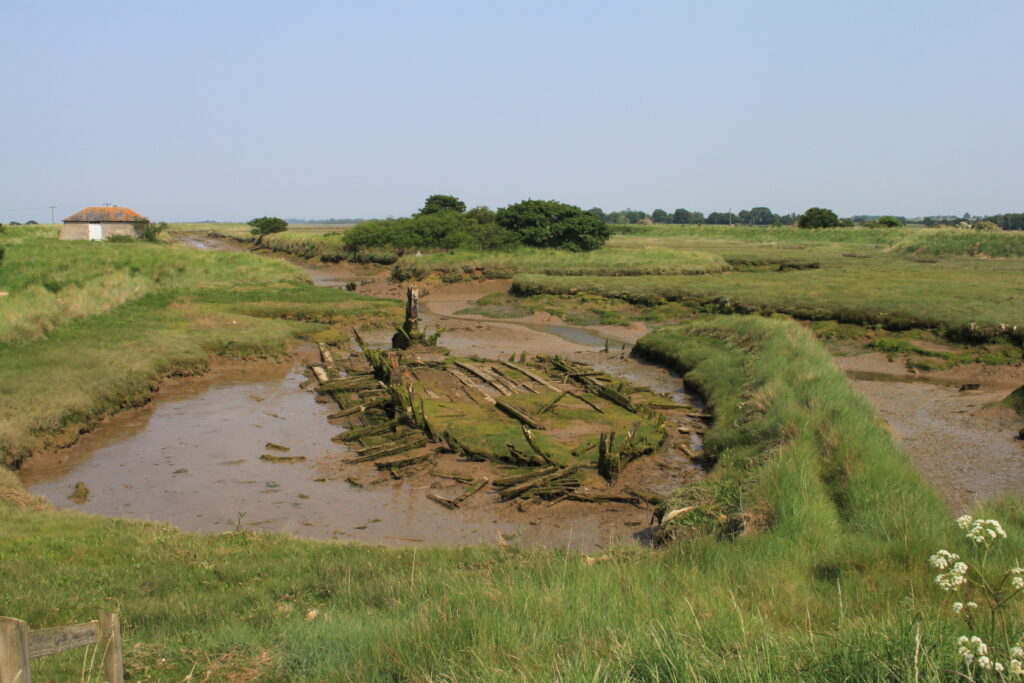 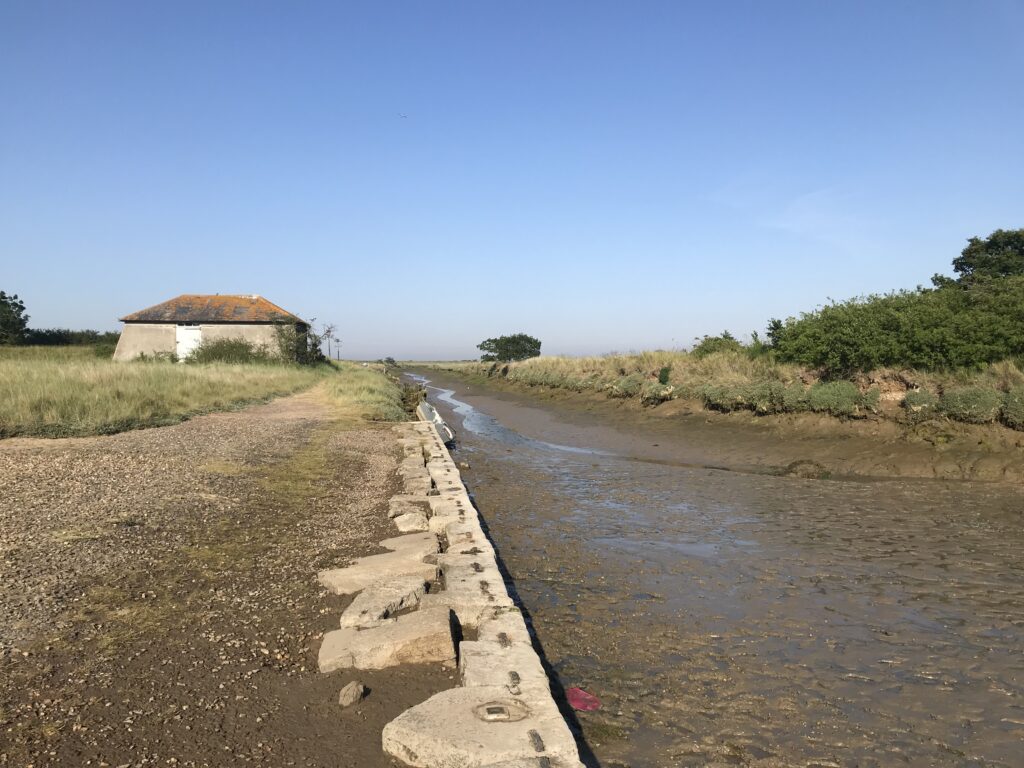 Kirby Quay is a picturesque spot where smuggling once thrived. The quay house was originally a granary. The little cottage was ‘Witch’s Cottage’ in Secret Water. 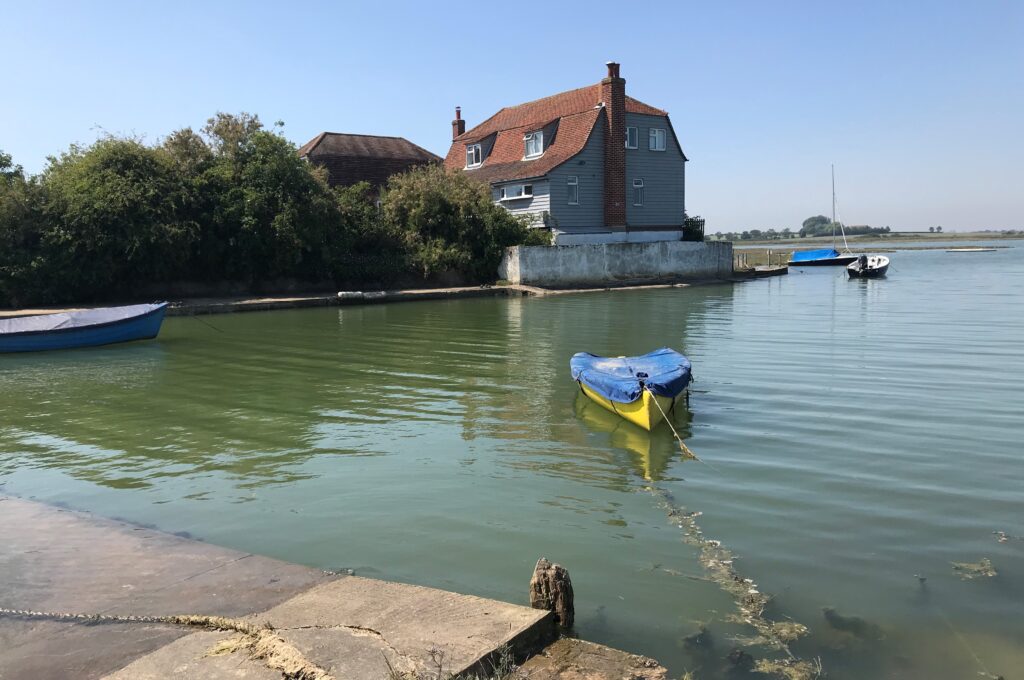 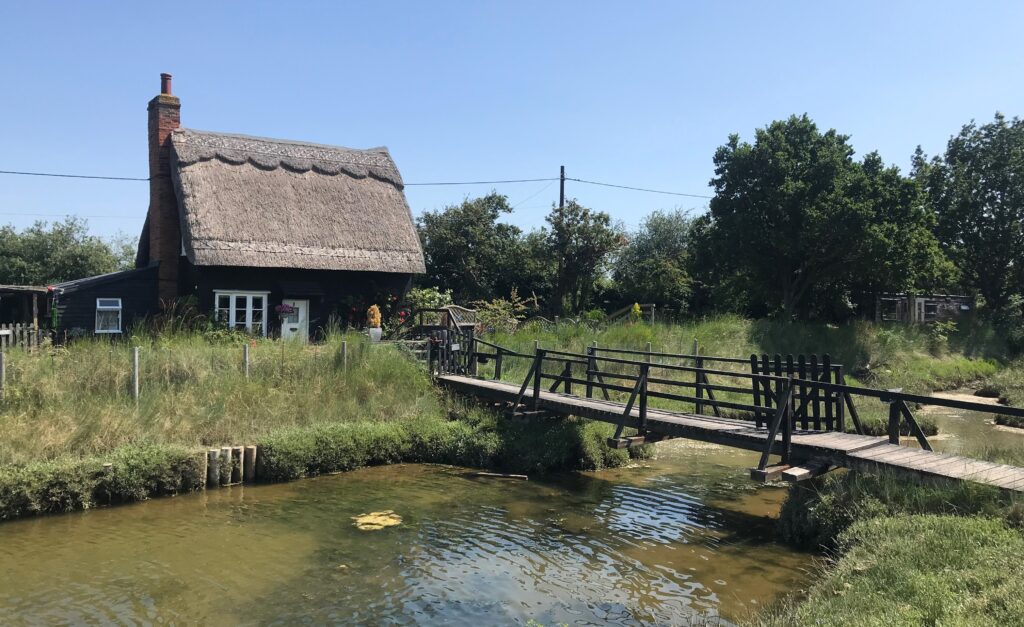 At high tide the footpath is covered. I got there just in time. And inland section makes a loop or a shorter walk starter at Kirby-le-Soken. 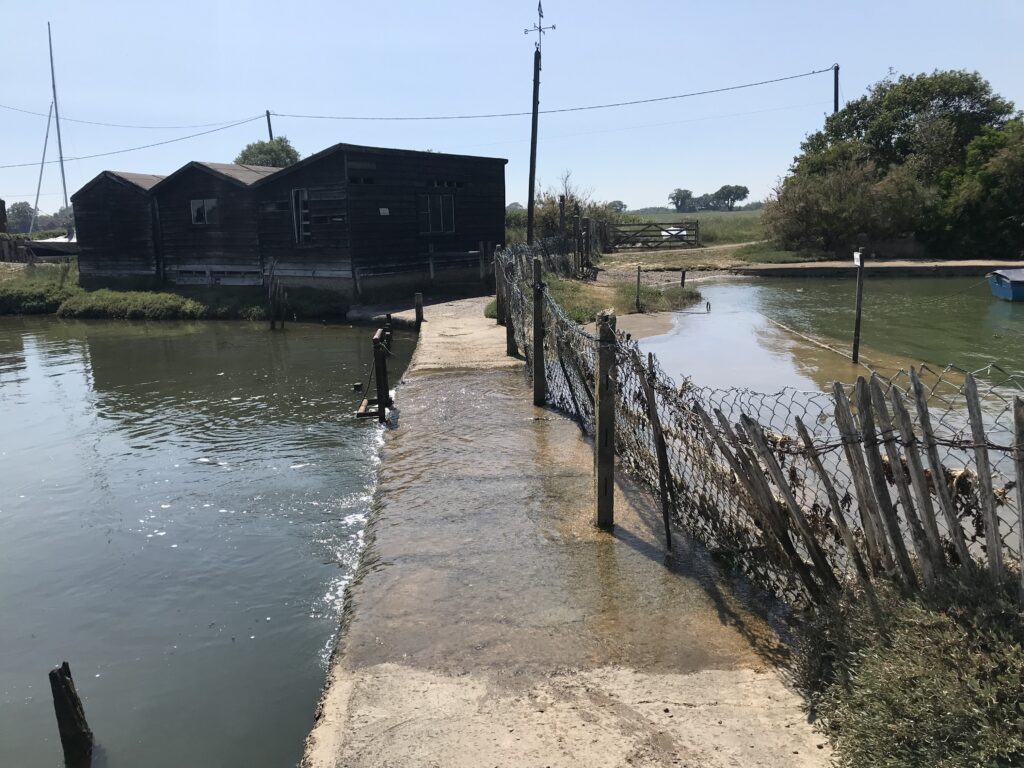 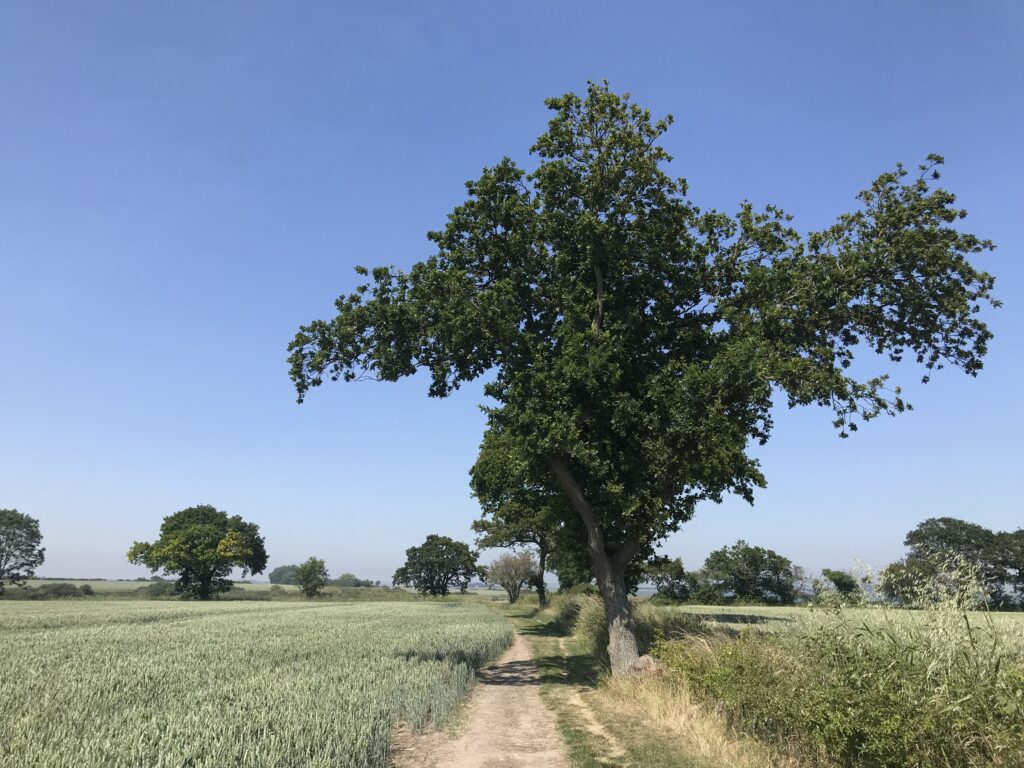 It is hard to believe that when writing No Boat Required I walked the mile from this slipway to Horsey Island which is just visible in the distance. The causeway wasn’t the driest (fishes were swimming in little pools) but it was an exciting walk across the mud. The island is private but unlike Osea I wasn’t thrown off. The full story of my visits to both islands and much about their history is included in No Boat Required. 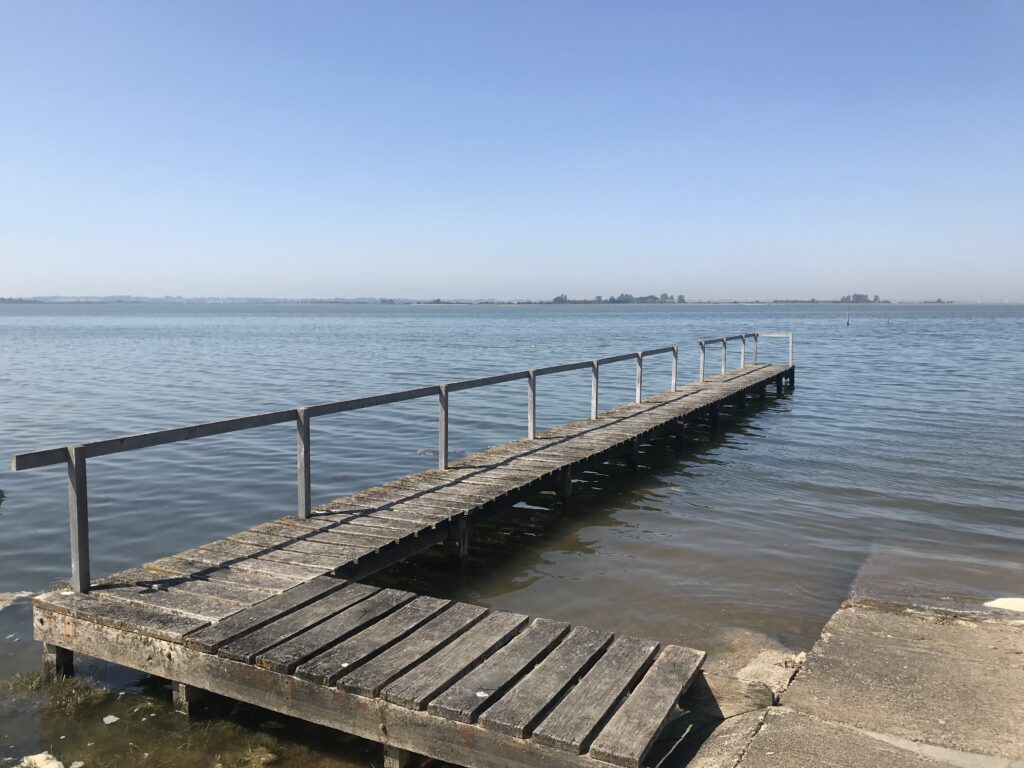 The routes from Beaumont Quay or Kirby-le-Soken are both variants of Walk Six in 50 Walks on the Essex Coast.