My next book, a walking guide to visit lesser known places on Dartmoor, is progressing.

It’s taking longer than the Essex coast guide as walking on Dartmoor is often far less straightforward. Many paths are less defined and I will probably need to do each walk about half a dozen times at different times of the year to ensure that I’ve chosen and documented the best route.

There are obviously other walking guides to Dartmoor but I am aiming for this one to be different:

I did a couple of walks between Christmas and New Year, both in misty conditions, which aren’t the best for clear photography but shows the moor in one of her most evocative moods.

The first was from Okehampton, climbing to Black Down Military Railway, a ‘target railway’ used by the army on the moor. Targets were pulled along a track by pulleys powered by static engines.

Return to Okehampton was through the Red-a-ven valley, beside of Dartmoor’s picturesque streams, especially with so much water from recent rain.

The second was from near Buckfastleigh, initially along a lane, passing this George VI post box, which is no longer in use but was decorated for Christmas with a lighted candle inside. 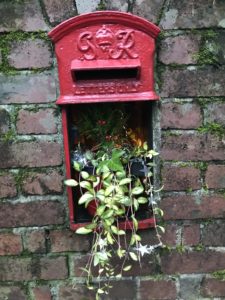 I love the moor gates that lead to freedom on the open moor, the Lud Gate at the end a track enclosed by tall granite walls, being one of my favourites.

Dartmoor has many legends, some more believable than others. This standing stone, ‘Little Man’, is apparently a lone piper who was turned to stone for playing on a Sunday. 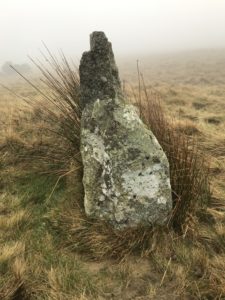 Huntingdon Warren is was of the remote warren houses on Dartmoor where rabbits were farmed for fur and meat. Sadly the house was burned down some time ago. The last warreners moved out in 1939 – to the house next door 1½ miles away. My father and I once met the warrener’s daughter here. She had been brought up at the warren and used to ride a pony to school.

The mist cleared as I walked back, allowing a clearer view of the clapper bridge that crosses the Walla Brook below the warren. 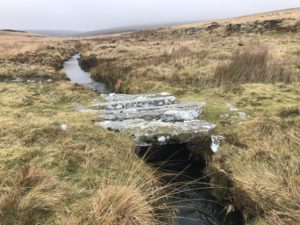