When I went to Breich in 2017, one of the forty stations visited for my book Remote Stations, I wrote that the station looked abandoned, its platforms resembling a wild flower garden. It was a sad, sight, run down and ready for closure. Only Network Rail didn’t get their way. By starting a petition I played a small part in the campaign which saved Breich from closure. 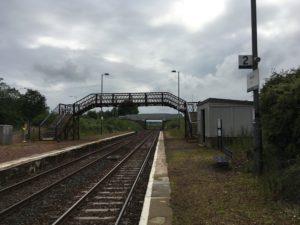 Electrification of the Shotts Line meant that the footbridge had to be replaced and Network Rail appeared to have quoted an excessive sum to rebuild the station. My objection suggested that a new footbridge was not necessary and that money could be saved by building a path from the road to the eastbound platform. This is just what Network Rail have done. Had the idea of a footpath never occurred to Network Rail, or did they include an expensive footbridge in order to inflate the cost and exaggerate their case for closing Breich?

Services had been cut to two a day and only 48 passengers recorded in the previous year, a common British Rail tactic for ‘closure by stealth’. Fortunately the Scottish Government reprieved Breich, saving the station for current and future residents and giving a message to Network Rail that in the 21st century people will not accept closure of our railway stations.

Recently I went back to Breich. What a transformation. 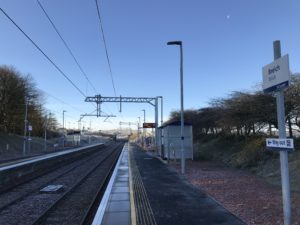 I’d travelled on the sleeper to Edinburgh (also a transformation with the new stock) and caught an early morning train to Glasgow. Most now stop at Breich, providing an almost hourly service. One person joined the train I got off and two others boarded the one I took back to Edinburgh. So that’s 10% of the total passengers in 2017 on just two trains. Now that trains are stopping here passengers are returning to Breich – a message that should be taken heed of elsewhere, notably at Pilning where the footbridge has been removed and the station has just two trains a week – both in the same direction! 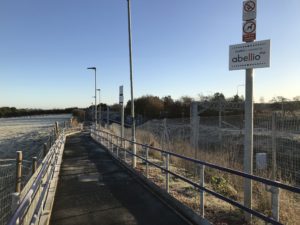 In my objection to closure I’d written that with a regular service people could travel to Breich for walking in the surrounding countryside. I spent my time here on a freezing morning enjoying a walk along a deserted lane and a track to Woodmuir Plantation. I look forward to returning for a longer walk and to publication of usage figures which will show that if trains are provided people will use them. 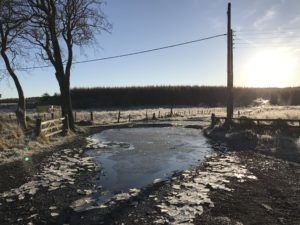