A Day Trip to Mallaig

Maybe it wasn’t right to feel a tinge of smugness as I looked down on Euston’s concourse packed with commuters waiting for their delayed trains home. Maybe though it was forgivable, as unlike most this evening, my train was on time and rather than taking tired workers home to a late dinner, it was waiting to deliver passengers to the Scottish Highlands by morning. 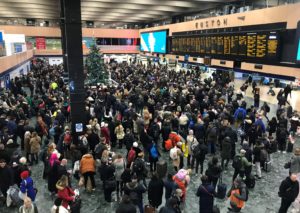 A spare sleeper ticket expiring at Christmas allowed a bonus trip to Scotland and I’d chosen my favourite route, the West Highland Line to Fort William. With en suite toilet and shower, Caledonian Sleeper’s new Mark 5 coaches allow a comfortable journey in their ‘hotel on wheels’. 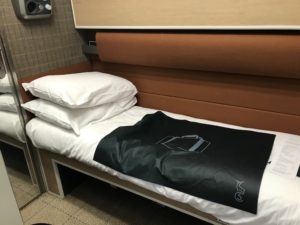 As usual on the Fort William sleeper I awoke as the train ran above Gare Loch but in mid-winter the deep loch below was invisible in darkness. Loch Lomond and the snow-capped Ben Lomond could just be made out as we travelled north but it was still dark as I made my way to the lounge car. After a little confusion resulting from me giving the wrong berth number (the early hour provided an excuse as opposed to my general forgetfulness), I was seated at a table laid for breakfast. Soon toast and a remarkably well filled bacon roll arrived. It was excellent, putting to shame some of the soggy microwaved offerings served up on some trains. 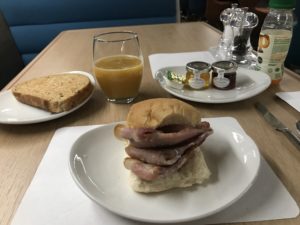 As dawn rose snow covered mountains were revealed in all directions. Snow lay on the platform at Rannoch where we passed a southbound train. Approaching the station there was an excellent view of the Moor of Rannoch Hotel, where I’d stayed when visiting Rannoch when writing Remote Stations. Once again I vowed to return. 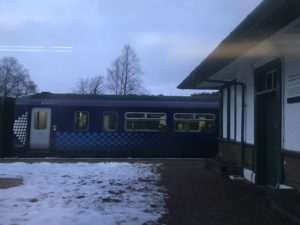 Rannoch Moor was wild as ever. The Victorian engineers floated the line on brushwood to take it across the bogs of this desolate but endearing landscape and the amazing views are never the same. Today a carpet of snow covered the moor and pools were frozen. A small herd of deer watched us pass, magnificent with their antlers and unperturbed by a train crossing what is their home not ours. A young boy at the next table asked if they were Santa’s reindeer. Maybe they were. If much more snow fell this could have been the North Pole.

Two walkers alighted at Corrour, the highest station in the UK. Both carried double packs and looked set for a few days in this wild and remote country. I’d thought of getting off here too, just for a short walk, but with snow on the ground considered myself ill-equipped even for this. As arguably our most lonely railway station I had of course visited Corrour for Remote Stations and will certainly return in better weather for the experience of travelling from London by sleeper to be walking next morning in such a wild yet beautiful place. 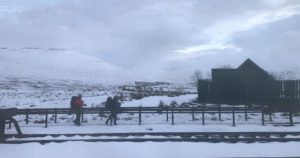 The railway soon descends, running above the spectacular Loch Treig before following the River Spean towards Fort William. 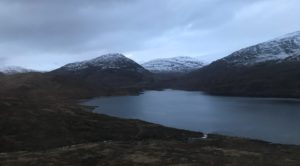 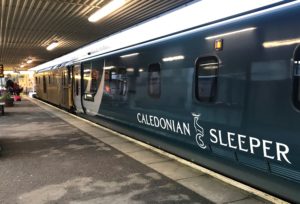 Here the sun was shining and I walked along Loche Linnhe with more wonderful views. 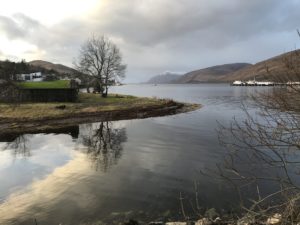 The tide was high and An Caol, an island I’d walked to for No Boat Required, only just peeped above the water. 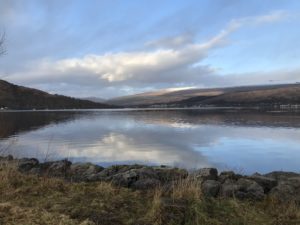 The mighty Ben Nevis was just out of the cloud, a classic view from the River Nevis Bridge. 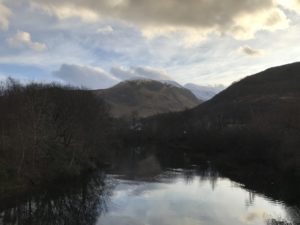 Soon my walk was thwarted by the high tide, water over-topping a footbridge, either side of which mounting posts enabled riders to dismount and lead their horses across. I thought of paddling but then realised the tide was still flowing in and it may have been more than a paddle to return. 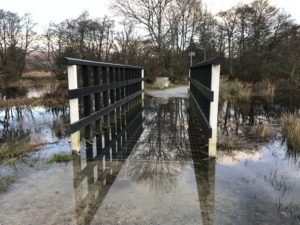 Next was a trip to Mallaig along the Highland Line Extension, which many claim to be the most scenic of all Scotland’s railways. In summers trains are packed and the Jacobite steam services often booked out months in advance, but today passengers were few. Unlike in summer I was the only one to photograph the famous Glenfinnan Viaduct, which isn’t easily done with non-opening train windows, but the view from the bridge to Loch Shiel made an atmospheric winter photo. 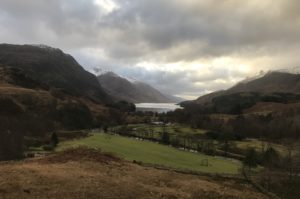 Some of the most spectacular views are of Loch Eilt, where to railway passes to the south and the road to the north.

Beasdale, which I’d walked to from Arisaig, was passed without stopping and by Mallaig the sun was shining. The railway was originally constructed to provide access to the rich west coast fishing grounds and the village of Mallaig built at the line’s terminus as a fishing port. The harbour is still busy with both fishing boats and ferries but as a still active port it’s not all picture postcard views. 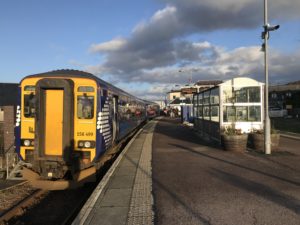 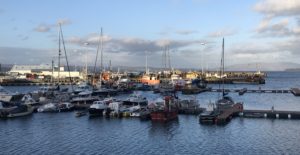 I found a walk along the valley behind the village, coming out opposite the isolated Knoydart peninsular, where the only links to the outside world are the ferry to Mallaig or a two day walk across wild country. Skye with its snow-topped Cullin Mountains, the steepest in Britain, soon came into view and as I walked back into the village the Small Isles of Rhum and Eigg could be seen. 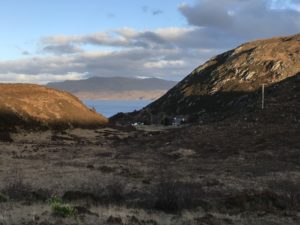 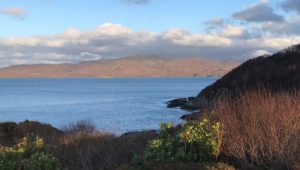 All of Mallaig’s cafes were shut. The village is busy in summer, especially when the steam train arrives, but with few tourists today (just me?) it was very much a working port for local people. I sat on a cold rock for a while watching dusk fall towards the unmistakable outline of Eigg and the gently sloping Ardnamurchan Peninsular, the most westerly point on the British mainland. 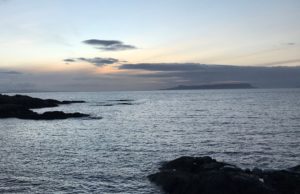 As the train took me south once more the sun was setting over Eigg, a final amazing view from the magnificent West Highland Line. 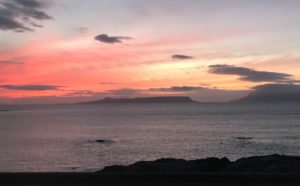 After an excellent dinner in Fort William I boarded the Highland Sleeper once again, enjoying my desert in a quiet lounge car. We trundled through the Highlands, stopping at eerily lit little stations to pick up the odd passenger. After Tyndrum I reverted to my berth, comfortable bed and sleep. A knock on the door at 7am woke me, the steward bringing another bacon roll. 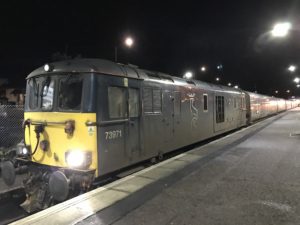